We recently came across an Eater interview with Rick Bayless discussing his Mexican culinary research library. It’s a collection of rare cookbooks, 30 years in the making. Some of these books provided the historical inspirations for his new menu at Topolobambo, which explores different culinary traditions from different periods in Mexican history. His first foray is Mexico City, 1491. We can’t wait to try some of the recipes. Maybe we can sneak into the library while we are there…

Speaking of Rick Bayless: we noticed that his restaurant XOCO has added a new dessert to their menu. Last month they added bacon-caramel corn balls to the mix. These desserts are made with Nichols Farm caramel, bacon, and ancho chiles. Now where have we heard of that idea before?

When we first learned that brownies are a Chicago invention, our minds were a little blown. Those fudgy rich bricks seemed so ubiquitous and ingrained in picnic culture, we never thought to question their origin. Danny immediately stated, as if fact, “Mole brownies.”

Our first attempt at creating a brownie that captured the depth and spice of mole was an inedible mess. Our second and third attempts were not much better. Others have succeeded at this, causing us to question our efforts at reinvention. We were frustrated. We learned an important lesson from our failures—go back to the source and start again.

Bertha Honoré Palmer, philanthropist and businesswoman, tasked her chef with developing a new dessert in relation to the World’s Fair: Columbian Exposition, held in 1893 in Chicago. The exquisite result, now known as the brownie, originally involved a tangy-sweet glaze made of apricot preserves and gelatin, poured hot over baked brownies, and then cooled before serving. The Palmer House Hotel still prepares their brownies this way.

We decided to create a mole-spice glaze inspired by the final step of original recipe that still makes it unique to Chicago. Ours is spicy and slightly bitter, topped with toasted pumpkin seeds and a pinch of salt. Try it on your favorite brownies, whether store-bought, from a box, or from scratch. It’s the perfect complement.

In a pan over medium-low heat, toast the peppers, anise, and sesame seeds until fragrant. Grind them together (we used a blender), and combine with cinnamon and ½ teaspoon of salt.

In a double boiler, combine chocolate, butter, and corn syrup, stirring until smooth. Add spice mix and vanilla. Adjust sweetness to your liking with sugar (but we recommend you retain some of the bitterness). You may need to add a little more butter to retain the silky texture.

Toast the pumpkin seeds separately, over medium-low heat. After you have poured the glaze, sprinkle with toasted seeds and a pinch of salt.

Our taste-testers called it “rich,” “smoky,” and “ethnic-tasting somehow.” They continued, “The roasted flavor complements the bitterness of chocolate,” and “this becomes more than just the sum of its parts.”

Thanks so much to our fearless taste-testers, we couldn’t do this without you.

Here are a few things Meso has read/listened to recently:

We enjoyed making (and eating) our Chicago Mixed popcorn recipe. NPR tells us a little more about the history of popcorn. Apparently the Aztecs had a word for the popping sounds of popcorn – totopoca.

In preparation for our Mole Brownie recipe (stay tuned), we stumbled across this wonderful souvenir book created by the Board of Lady Manager’s of the 1893 World’s Columbian Exhibition in Chicago. The board was headed by Bertha Palmer, the wife of Chicago business man and hotelier Potter Palmer. Bertha was also the spark for the invention of the brownie. Check out this digital version of the book, which is a compilation of autographed recipes by the female representatives from all over the United States. There are some interesting (and odd) recipes. We were especially  interested in the recipes coming from New Mexico, like the recipe for Tamales de Dulce, which was written in Spanish!

We have been listening to a lot of NPR recently, and Scott Simon recently interviewed conjunto musical legend Flaco Jimenez about his recent musical collaboration with Max Baca. Conjunto is a wonderful mixture of Mexican and German music. As Scott Simon says, conjunto “can be as American as cherry pie.”

Guillermo Gómez-Peña is a performance artist, most known for La Pocha Nostra and The Couple in the Cage with Coco Fusco. Recently we read his essay, Multicultural Paradigm: Open Letter to the National Arts Community, written in the early 90s. It’s an interesting commentary on the emergence of Latino culture into the public sphere and the development of what he calls “border culture.”  The essay analyzes the collision, opposition, and fusion of cultures in the United States, a topic we are also wrestling with here at Meso. While written over twenty years ago, much of Gómez-Peña’s essay still resonates with current events.

We just completed another Meso event, full of spices and chocolate, with much more to report. But first, one of our conversations about favorite restaurants inspired me to post something that’s been on my mind ever since Chicago Magazine published their list of The 8 Best Mexican Restaurants in Chicago.

This list is fascinating. I have so many questions. For example, how many Mexican restaurants did they sample, and with what range of dishes? What was the geographic boundary they used when defining “Chicago?” Why the number 8? How did they define “Mexican?”

Why did they feel so definitively confident that these are The 8 Best Mexican Restaurants in Chicago?

I also wonder how the editors would respond to the comments posted in response to the article, specifically the fact that restaurants in areas of Chicago with high percentages of Mexican-Americans and Mexican immigrants, such as Little Village and Pilsen, are conspicuously absent. Or that seven of the eight restaurants on the list received fewer than three stars, or below a “very good” rating. To further complicate the matter, Chicago Magazine had recently published this mouthwatering and thoughtful compendium of tacos places in Chicago, with depth and understanding that makes this list all the more mystifying.

The purpose of this post is not to lambast another’s opinion about food. It’s to question the parameters that are assumed about cuisine. More pointedly, I ask if these preconceptions reflect assumptions about culture itself. What does this list say about visibility and understanding of Mexican culture in Chicago?

At Meso, we talk about dining experiences pretty frequently, and last Sunday we asked our guests to tell us about their favorite restaurants and what they love about them. Answers included comments about accessibility, comfort, confidence, freshness, with emphasis on personal experience as well as quality of food. Of course, these lists are always subjective. But we prefer to question our preferences with the hope that it brings us closer to truth, or at least to understanding.

Tell us about your favorite restaurants, Mexican or otherwise, and why you love them!
–Christina

We are thrilled to present the top-rated recipe from last week’s Meso event: 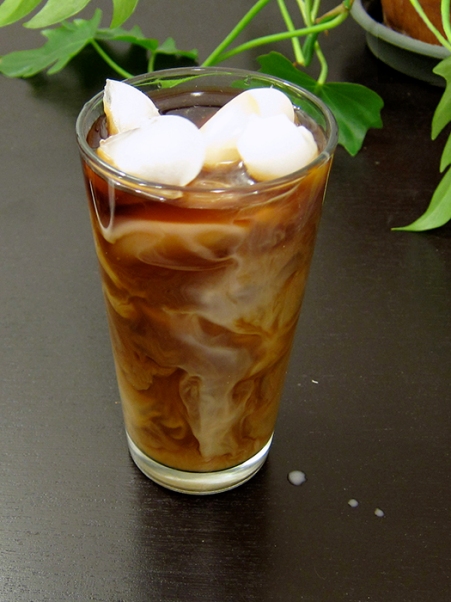 In a large bowl combine rice, almonds, cinnamon stick and 2 ½ cups of hot tap water. Allow to cool, then cover and refrigerate overnight.
After toasting the peppers and anise, blend them until they are a medium-coarse consistency.
Add the rice, almond, and cinnamon mixture into the blender, add the sugar, and blend on high for several minutes.
Strain through a sieve lined with cheesecloth, squeezing on the solids until only a dry pulp remains. Repeat straining process with additional two cups of cold water.

Cold Brew Coffee
1 1lb bag of coarse ground coffee, medium roast
10 cups of cold water
Combine the two in a pitcher and stir with a wooden spoon. Cover and leave overnight to steep at room temperature, for up to 12 hours. Drain through a sieve. This can also be made in smaller batches with a ratio of 2/3 cup grounds and 3 cups water.

This recipe was probably inspired by the “heat wave” we had the last few days in Chicago, where temperatures reached somewhere above 30 degrees. We were sick of scalding our mouths with our coffee! However, our guests Tait and Clarence warmed their drinks in the microwave and found they preferred them that way.

The mole-spiced brownies, our featured recipe, and inspired by the original brownie created for the Chicago World’s Fair in 1893, were a little more complicated. We are still sorting through the ratings and going back to recipes to try to figure out what went so weirdly wrong. As I spooned out shapeless blobs of spicy chocolate onto our guests’ plates, Danny only half-joked, “We’re dying a little inside right now.” However, our amazing guests had quite a bit of positive feedback for us, and we love them for it. More on that soon!